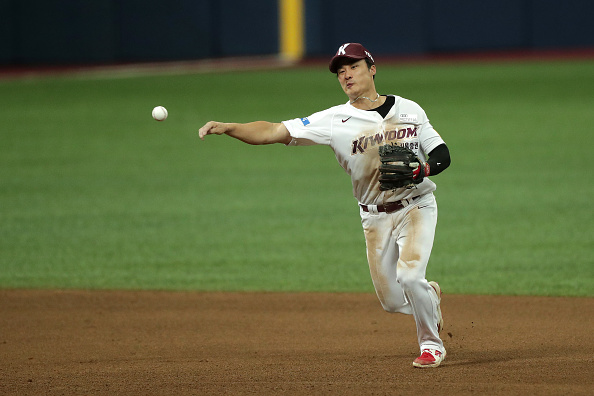 The Red Sox are reportedly one of several teams that are interested in signing free-agent Korean infielder Ha-Seong Kim, according to ESPN’s Daniel Kim.

Per ESPN’s Kim, “Kim has several MLB offers in the five-plus year range.”

Kim, 25, has has yet to play at the major-league level, but has proven to be one of the more impressive players in the Korean Baseball Organization over the past seven seasons.

He has also proven to be one of the better defensive shortstops in the KBO in recent years, picking up a pair of Gold Glove awards for his efforts at short in 2018 and 2019.

Kiwoom officially posted Kim on December 7, giving major-league clubs until the first of January to acquire his services.

Depending on how much Kim signs for, that club will owe Kiwoom 20% of the contract’s first $25 million in value, 17.5% of the next $25 million, and 15% of anything beyond the $50 million threshold, as noted by MLB Trade Rumors‘ Mark Polishuk.

MLBTR predicts that Kim will land a five-year deal worth somewhere around $40 million with whichever club he signs with. They also had him as their seventh-ranked free agent at the onset of the offseason.

All this being said, the Red Sox should be players for Kim, but only if they can convince him to move to second base, a position he has very little experience at, on a (just about) full-time basis.

The Boston Globe’s Alex Speier observed earlier this month that as a five-star phenom in Korea, Kim’s “age and performance would fit the Sox’ vision of upgrading their long-term talent base” — but only if he is open to playing second.

“In all likelihood, [Kim’s] the only open-market second base option this winter for whom the Sox would consider a deal of more than two years,” Speier wrote.

This may be the case because the Red Sox are coming off a season in which their second basemen struggled mightily, as has seemingly been the case the past few years.

Those are truly dismal numbers from one position group, and they will likely need to improve if Boston intends on not being one of the worst team in baseball for a second consecutive year in 2021.

Identifying second base as a potential area of weakness headed into the spring, how do Red Sox chief baseball officer Chaim Bloom and Co. go about addressing that area in order to improve their squad?

Well, besides the trade market, free agency is always an option, too. And Kim — at the ripe age of 25 years old, just entering his prime — might just be the best infielder not named D.J. LeMahieu available to sign at the moment.

“The international market is an intriguing one and a good one,” Sox manager Alex Cora said of international free agents such as Kim during his virtual winter meetings media availability last week. “Like the rest of the big-league organizations, everybody’s paying attention and doing their homework.

“They’re very talented, they’re guys that can impact the game sooner rather than later,” added Cora. “It will be interesting how it moves in the upcoming days or weeks. These guys, throughout their careers, they’ve been very solid, very consistent, and that’s something that intrigues not only the Red Sox, but the rest of the organizations at the big-league level.”