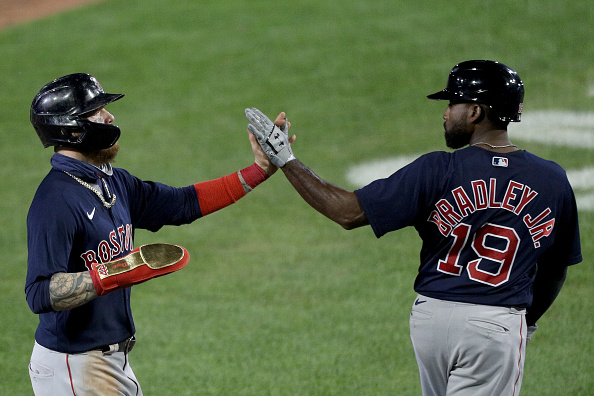 For the first time since 1917, the Red Sox played a game in Buffalo, NY on Tuesday and were able to halt a mini two-game losing streak with a 9-7 victory over the Blue Jays to improve to 10-20 on the year.

Kyle Hart made his third start of the season for Boston since being recalled on August 13, and unlike his last time out against the Phillies, he took a step back in this one.

That being the case because over just 3 1/3 innings pitched, the rookie left-hander was charged with six runs, all of which were earned, on eight hits and three walks to go along with three strikeouts on the night.

The first four of those Toronto tallies came right away in the bottom half of the first, when after filling the bases with three of the first four hitters he faced, Hart yielded a two-run double to Lourdes Gurriel Jr.

Moments later, Danny Jansen followed suit by ripping a two-run single off the Sox starter to left field, but wound up getting gunned down at second base by Christian Vazquez to end the inning.

After dancing his way around some danger in the second and third, Hart ran into more trouble in the bottom half of the fourth, a frame he would not be able to finish.

There, Hart put runners on first and second with a one-out single and walk, which in turn marked the end of his outing and made way for Phillips Valdez to enter.

Making his 12th appearance of the year, Valdez inherited those two runners and allowed both of them to score on a two-run base knock off the bat of Vladimir Guerrero Jr., thus closing the book on Hart’s evening. Fortunately, the 28-year-old was able to escape the fourth without giving anything else up while also working a scoreless bottom of the fifth.

From there, left-hander Darwinzon Hernandez stranded a total of three base runners over two scoreless innings in the sixth and seventh, while Ryan Brasier tossed a 1-2-3 eighth and Matt Barnes served up a solo shot to Teoscar Hernandez in the ninth but held on to notch the save and the 9-7 win for his side.

On the other side of things, the Red Sox lineup was matched up against a fairly familiar foe in Blue Jays right-hander Chase Anderson, someone they could only push across one run against back on August 8.

This time around, the Boston bats got to Anderson starting in their half of the second when Xander Bogaerts led off with a hard-hit double up the middle and Mitch Moreland drove him in on an RBI single to center field.

Fast forward to the fourth, and the Bogaerts-Moreland combination struck once more as the former led the inning off with a single this time and the latter followed with a run-scoring double off of Anderson.

A passed ball later in the inning allowed Moreland to move up 90 feet to third base, and Jackie Bradley Jr. took full advantage of that mistake committed by the Blue Jays by plating the first baseman on an infield single.

Toronto did manage to tack on two runs of their own in the fourth to re-take the three-run lead they previously had, but that did not stop the Sox offense from erupting in the sixth.

It started with a leadoff walk drawn by Moreland, which would result in the Jays making a pitching change that saw Wilmer Font take over for Anderson.

Christian Vazquez greeted the new reliever by lacing a sharply-hit double over Teoscar Hernandez’s head in deep center field to advance Moreland up to third.

With one out and two runners in scoring position, Bradley Jr. followed Vazquez’s lead and drove in Moreland on an RBI single.

As the lineup was about to flip back over, Jose Peraza took a 95 mph fastball from Font off his wrist and the bases were full for leadoff man Alex Verdugo.

Having already extending his hitting streak to 14 games, Verdugo proceeded to rip a run-scoring single to right field to score Vazquez and keep the bases loaded for Rafael Devers.

Devers, up against new Blue Jays reliever A.J. Cole, did not waste too much time in clearing the bases, as the 23-year-old took a 3-2, 82 mph slider from the right-hander and absolutely tattooed a three-run triple down the right field line.

Per Statcast, Devers’ fifth career triple had an exit velocity of 110.2 mph off the bat. It also put the Red Sox up 8-6, and J.D. Martinez made it a 9-6 contest with a sacrifice fly.

By the time the final out of the top of the sixth was recorded, the Red Sox had plated six runs and sent 10 hitters to the plate.

As it would later turn out, that sixth inning would be all the Red Sox would need to top the Blue Jays on Tuesday, with 9-7 going on to be your final score.

Some notes and observations from this win:

It’s tough to see Kyle Hart getting another start the next time through the rotation given his numbers in the majors thus far, as The Boston Globe’s Pete Abraham points out:

Next up for the Red Sox, it’s the middle game of this three-game set against the Blue Jays in Buffalo on Wednesday night.

Right-hander Colten Brewer will get the start for Boston in place of Nathan Eovaldi, who is dealing with a calf cramp, while the Blue Jays have yet to name a starter.

In his last time out against the Orioles last Friday, Brewer put together four scoreless innings of work in his second start and ninth overall appearance of the season.

With the PawSox last year, the 27-year-old actually made two appearances at Sahlen Field right and tossed 1 1/3 total total shutout innings of relief. He also pitched a perfect fifth inning against the Blue Jays back on August 7.

First pitch Wednesday is scheduled for 6:37 p.m. eastern time on NESN and WEEI. Red Sox looking to start the second half of the season on a positive note.