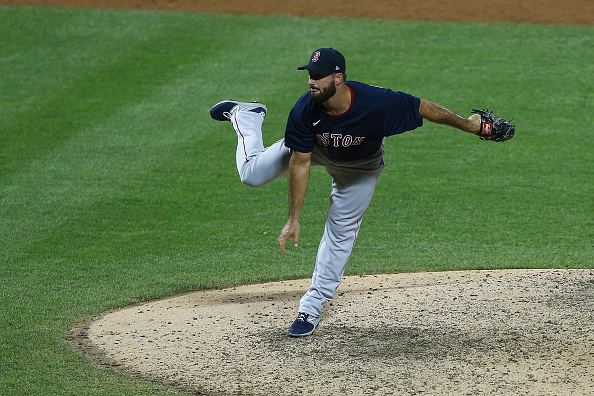 With this trade made, the first domino has fell for chief baseball officer Chaim Bloom and Co. leading up to the August 31 trading deadline.

Workman was set to become a free agent this winter, while Hembree is under team control through the end of the 2021 season.

The Phillies, who came into the weekend with the worst bullpen ERA in baseball (8.07), are clearly trying to upgrade their pen as they look to vie for a playoff spot despite a 9-12 start to the season.

By acquiring Hembree and Workman from Boston, Philadelphia has accomplished this in at least some capacity.

Hembree, 31, carried a 1.86 ERA and .503 OPS against through his first 10 appearances and 9 2/3 innings of the year before getting lit up for four runs against the Phils on Tuesday.

Workman, meanwhile, turned 32 last week and had yielded three runs on eight hits, four walks, and eight strikeouts through his first seven outings and 6 2/3 innings of 2020. That’s good for a 4.05 ERA and 2.57 FIP.

The two now-former Sox hurlers will likely become two of the top late-inning relief options out of the Phillies bullpen from now until the end of the season.

As for what the Red Sox got back in this deal, let’s start with Nick Pivetta.

A 27-year-old right-hander out of British Columbia, Pivetta appeared in three games for the Phillies prior to being optioned to the club’s alternate training site on August 11.

In those three outings, the former fourth-round pick surrendered 10 earned runs over just 5 2/3 innings of work.

Per Statcast, Pivetta, who is listed at 6-foot-5 and 214 lbs., is a four-pitch pitcher who primarily relies on his four-seam fastball and has a curveball, changeup, and slider in his arsenal as well.

Turning to Connor Seabold now, the 24-year-old was the Phillies’ third-round pick in the 2017 amateur draft out of Cal State Fullerton.

Per his MLB Pipeline scouting report, Seabold “will always be a command and control pitcher, one who has to rely on changing speeds and keeping hitters off-balance. His swing-and-miss rate went up in the Arizona Fall League and if that’s for real, he could fit into the back end of a big league rotation soon.”

Because the Red Sox traded Hembree and Workman, they opened up two spots on their 60-man player pool, which will now presumably be filled by Pivetta and Seabold. The former was on Philly’s 40-man roster, while the latter was not.

Update: For clarity, Pivetta was optioned to the Sox’ alternate training site in Pawtucket following the move.