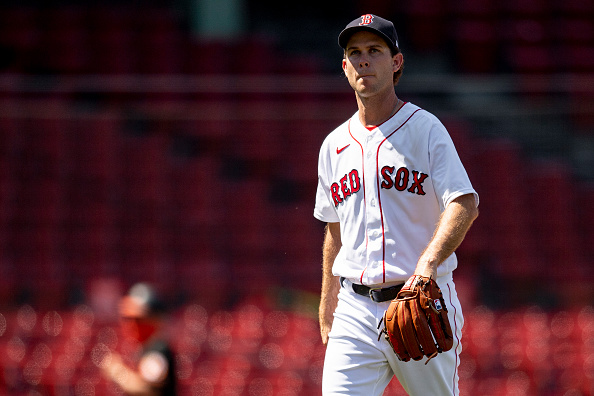 For the first time this season, the Red Sox find themselves in the midst of a losing streak as they dropped their second straight to the Orioles on Sunday afternoon.

Ryan Weber, fresh off making his first ever Opening Day roster, struggled in his first official start of 2020. The right-hander yielded six runs, all of which were earned, on six hits and three walks, all while failing to record a single strikeout, over 3 2/3 innings of work.

The O’s offense got on the Sox starter right away on Sunday, with Rio Ruiz crushing a two-run homer off a first-pitch, 85 MPH cutter in the first.

Following that mishap, Weber managed to retire three of the four hitters he faced in the top half of the second, which seemed encouraging at the time until he served up four additional runs over the next two innings.

Weber’s day came to a close as soon as Anthony Santander finished rounding the bases after crushing a 3-2, 80 MPH cutter from the 29-year-old into the Red Sox bullpen with two outs in the top of the fourth.

Finishing with a final pitch count of 65 (42 strikes), Weber relied on his sinker exactly 40% of the time he was on the mound Sunday and topped out at 89.6 MPH with the pitch. His next outing should come against the Yankees in the Bronx on Friday night.

In relief of Weber, Colten Brewer entered with two outs in the fourth, got out of the inning unscathed, and also tossed a scoreless top half of the fifth.

From there, Marcus Walden and Matt Barnes combined to walk four Orioles over three shutout innings of relief in the sixth, seventh, and eighth, while Austin Brice surrendered one run on a Chris Davis RBI double in the ninth.

That proved to be a back-breaking hit, as Baltimore went on to take the series by a final score of 7-4.

On the other side of things, the Red Sox lineup was matched up against veteran left-hander and Orioles starter Wade LeBlanc on Sunday.

Already trailing by a pair of runs before even taking their first at-bats of the day in this one, the Sox offense was catapulted by Christian Vazquez, who put his side on the board in the second inning with his first home run of 2020, a 389-foot solo shot over the Monster. 2-1.

Congrats to whoever on Lansdowne got that ball! pic.twitter.com/iFUHvcvpmM

Fast forward to the fifth, and another right-handed hitter went deep for the first time this season, as Kevin Pillar led the inning off by depositing a 2-2, 87 MPH sinker from LeBlanc onto Lansdowne Street. His first homer as a member of the Red Sox made it a 6-2 game in favor of Baltimore.

Kevin Pillar with his first home run of the season and first as a member of the #RedSox. pic.twitter.com/W6KDqtzfGc

In the sixth, a leadoff single courtesty of Jackie Bradley Jr. and a two-out double off the bat of Rafael Devers, his first hit of the year, chased LeBlanc out as the Orioles brought in right-hander Miguel Castro to face off against Xander Bogaerts.

After fanning against Castro on Saturday, Bogaerts rebounded by lacing a two-run double through the left side of the infield to score both Bradley Jr. and Devers. Just like that, Boston was only trailing by two.

A las, nothing more came for the Boston bats as they went down rather quietly in the seventh, eighth, and ninth innings to ultimately come up short in this one by a final score of 7-4.

Some notes and observations from this loss:

The Orioles went 1-for-12 with runners in scoring position and still managed to win this game by three runs.

Speaking of runs scored, the Red Sox have scored six over their last 18 innings. That’s not going to get the job done.

Next up for the Red Sox, they’ll welcome the New York Mets into town for a four-game, home-at-home series beginning on Monday.

Left-hander Josh Osich will serve as the opener for Boston and will be making the first start of his career in doing so, while the Mets will roll with veteran right-hander Michael Wacha.

Osich, who turns 32 in September, tossed a scoreless ninth inning on Saturday in his Red Sox debut.