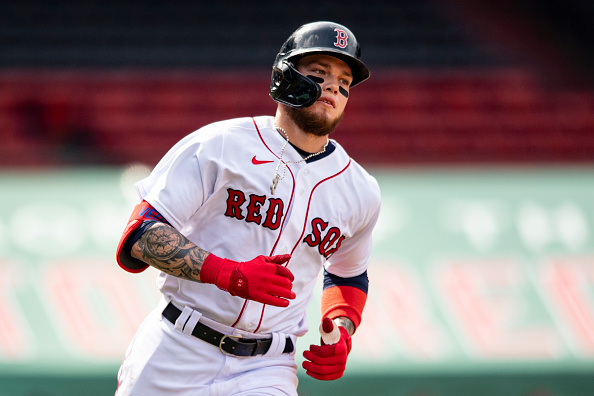 After managing just two runs in Saturday’s loss to the Orioles, the Red Sox have again shook up their lineup for Sunday’s series finale at Fenway Park.

With veteran left-hander Wade LeBlanc getting the start for Baltimore, the left-handed-hitting Andrew Benintendi and Mitch Moreland will start this one on the bench in favor of Kevin Pillar and Michael Chavis.

Alex Verdugo, on the other hand, will be making his second consecutive start for the Sox and his first as a left fielder batting out of the seven-hole. The fact that he is in against a left-handed starter likely has to do with his three-hit performance on Saturday, while Benintendi is a chilling 0-for-9 to start the new season.

Other notable lineup notes for Sunday include Jose Peraza batting out of the leadoff spot, J.D. Martinez remaining in the two-hole for the third straight game, Rafael Devers remaining in the three-hole despite going 0-for-his-first-9 at the plate, Xander Bogaerts returning after starting Saturday’s game on the bench and batting cleanup, Kevin Pillar batting fifth and starting in right field once again, Christian Vazquez returning after a day off on Saturday and batting sixth, and Jackie Bradley Jr. rounding things up and starting in center field.

Among Boston’s starting nine, Martinez by far has had the most success off LeBlanc, as the 33-year-old slugger owns a 1.856 OPS in 12 career plate appearances against the O’s starter.

All this is coming as Red Sox right-hander Ryan Weber, fresh off making his first even major-league Opening Day roster, will be making his first start of the 2020 campaign for Boston. I believe Red Sox manager Ron Roenick said the goal is for Weber to go at least five innings in this one.

First pitch Sunday is scheduled for 1:35 p.m. eastern time on NESN and WEEI. Red Sox going for the series victory.