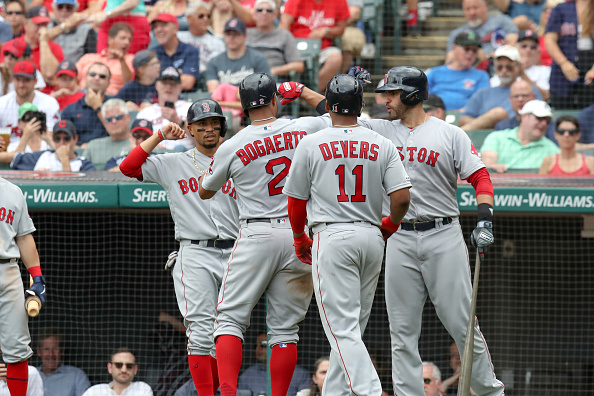 2019 Most Valuable Player awards for both the American and National League were announced by the Baseball Writers’ Association of America on Thursday night.

By the end of the 2019 season, Betts, Devers, Bogaerts, and Martinez made up the top four of the Sox’ everyday lineup.

Among the quartet, Betts and Devers finished first and second in the American League in runs scored, with Betts crossing the plate 135 times and Devers 129.

Back in April, Bogaerts inked a seven-year, $132 million extension to stay with the Red Sox for the foreseeable future. That extension does not really kick in until next year.

There have been rumblings that the Sox would like to get an extension done with Devers this offseason as well, meaning the left side of the Boston infield would be set for years to come.

And with J.D. Martinez, only one writer, George A King. III of the New York Post, gave the 33-year-old a 10th place vote, resulting in the 21st place finish.

Earlier in the month, Martinez opted in to the remaining three years and $62 million of the deal he signed with the Sox back in 2018. Granted, he could opt out next winter or even be traded before the start of the 2020 season, depending on what plans chief baseball officer Chaim Bloom and co. have in store for the next few months.

Anyway, the deadline for teams to add players to their 40-man rosters to avoid Rule 5 Draft eligibility is next Wednesday, so that’s the next big offseason event to look forward to.