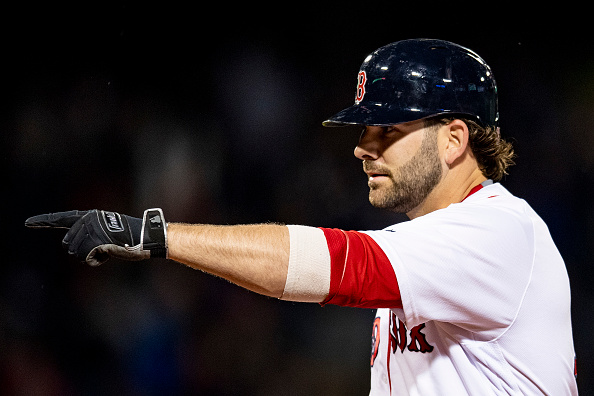 Prior to their series finale against the Cleveland Indians on Wednesday, the Red Sox placed first baseman Mitch Moreland on the 10-day injured list with a lower back strain and optioned right-handed reliever Travis Lakins to Triple-A Pawtucket.

The club made the transactions official earlier Wednesday.

Prior to tonight’s game, the #RedSox made the following roster moves:

1B Mitch Moreland was placed on the 10-day IL with a low back strain, retroactive to May 26.

Moreland, 33, had been out of Boston’s lineup since May 25th after taking a line drive off his knee against the Astros and being “banged up” as of late per Red Sox manager Alex Cora.

Since the move to the IL is retroactive to May 26th, Moreland will be eligible to be activated starting June 5th.

Along with shelving their first baseman, the Red Sox also optioned Travis Lakins, who allowed the go-ahead run to score in Tuesday’s loss to Cleveland, to the PawSox.

Ranked as the organization’s No. 17 prospect per MLB.com, the 24-year-old Lakins has posted a 6.43 ERA over four relief appearances and seven total innings pitched in two separate stints with the big league club.

On the other side of these moves, righty Colten Brewer returns to the Red Sox three days after being optioned. He did not appear in a game for the PawSox.

Josh Taylor, meanwhile, was the player to be named later in the trade with the Arizona Diamondbacks for Deven Marrero last May.

The undrafted 26-year-old owns a 2.91 ERA through 19 appearances out of Pawtucket’s bullpen so far this season.

First pitch Wednesday is scheduled for 6:10 PM EDT on NESN. Here’s how the Red Sox will be lining up in their finale against the Tribe.

Going for the series win today.