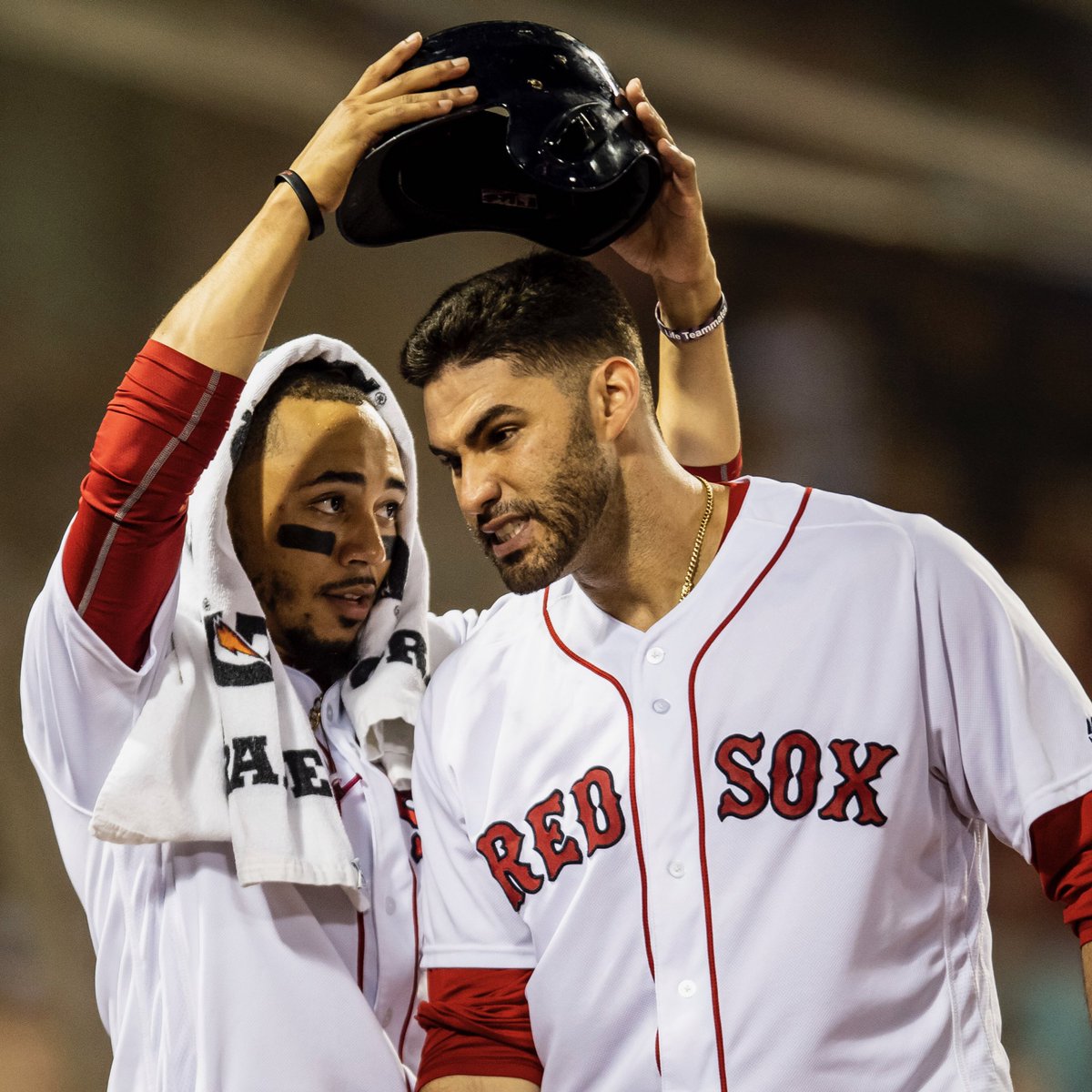 On the night after Mookie Betts walked off the Minnesota Twins with his 25th home run of the season in the tenth inning on Friday, the Red Sox carried over that instant offense by piling up nearly a dozen runs against Minnesota on Saturday. It certainly was not easy, as the team actually trailed for about a third of the game, but in the end, came away with their 73rd win of the year to get back to 40 games over the .500 mark.

Making his 22nd start of the season, Rick Porcello was part of the reason the Red Sox were down early in this one, but by the time he departed, the team was in a fairly decent spot while the New Jersey native had settled in to eventually notch his 13th winning decision.

Pitching into the sixth inning, the righty surrendered four earned runs on five hits and just one walk to go along with five strikeouts on the night.

In the 5.2 innings he appeared in, the most costly miscues Porcello made came in back-to-back innings starting in the second.

Trailing by one run, Twins DH Logan Morrison launched a 434 foot bomb of a solo home run to tie things up at one.

Just an inning later, two straight one out singles from Minnesota’s 9-1 hitters, followed by a two out, two-run triple off the bat of shortstop Jorge Polanco had the Twins up by a couple of runs early. They tacked on another on a Brian Dozier RBI single, but according to his post game interview session, Porcello did not seem as peeved about that as he did the Polanco triple.

From the top of the fourth on though, the 29 year-old hurler retired eight of the last 10 batters he faced, with some help from Andrew Benintendi, before getting the hook with his pitch count reaching 100 (66 strikes).

Out of those 100 pitches, Porcello relied on his off-speed arsenal the most last night, as he went to his slider and curveball a combined 53% of the time. Only going to his four-seam fastball 22 times, Porcello topped out at 92.3 MPH with it on his 46th pitch of last night’s contest.

Improving to 13-4 on the year now, best for second in the American League, not that it matters, Porcello will look to turn a new page once the calendar flips to August. In five starts this month, we saw quite possibly the best of the former Cy Young Award winner with six shutout innings against the Baltimore Orioles and we may have seen the worst of him with that eight run stinker against the Blue Jays right before the All-Star Break.

Finishing the month with his ERA 0.43 points higher than it was at the beginning, Porcello’s next start should come sometime against next week/weekend’s series against the New York Yankees.

Anyway in relief of Porcello, Heath Hembree entered the game last night with two outs in the top half of the sixth and a runner at second.

As he has done so well recently, Hembree stranded the runner, Brian Dozier, in scoring position at third base following a successful stolen base attempt to keep the Twins deficit at one. After his team tacked on an insurance run in their half of the sixth, the South Carolina native came back out to toss a scoreless seventh frame en route to pick up his 15th save of the season.

Tyler Thornburg would come on in place of Hembree in the eighth, and he sat down the only three batters he faced to extend his scoreless innings streak to 3.2 following an ugly outing last weekend in Detroit.

And finally, by the time Joe Kelly came in to get some work in the ninth, the Red Sox had jumped out to a 10-4 lead to put this game away in the eighth.

Craig Kimbrel, despite a blown save on Friday, was available but was not needed.

In the lone inning he pitched in, Kelly did not walk one batter for the first time since July 13th on his way to locking down the win for the Red Sox.

On the other side of things, the Red Sox lineup was matched up against a familiar opponent in Minnesota’s starter Jake Odorizzi.

Having spent five seasons with the Tampa Bay Rays before signing with the Twins last winter, Odorizzi had made 17 starts against Boston to go along with a not so shiny 4.45 ERA in those starts. Based on that information, last night was kind of the same deal, meaning the Red Sox saw him well.

The scoring started early on, as three straight one out hits from the Red Sox’s 2-4 hitters was highlighted by a Mitch Moreland RBI single to drive in Andrew Benintendi from second and give his team an early 1-0 lead.

After the Twins jumped all the way out to a 4-1 lead of their own in the third, the Red Sox did not get on the board again until their half of the fourth.

With one out in the inning, a Rafael Devers ground-rule double followed by an Eduardo Nunez walk put the Red Sox in an ideal scoring spot to try to trim the Twins lead down.

Even though Sandy Leon failed to advance Devers to third on a fly out to center field, Jackie Bradley Jr. came through a few minutes later.

On the first pitch he saw from Odorizzi, an 84 MPH slider, the Red Sox outfielder ripped a 103.3 MPH triple just out of the reach of his counterpart Jake Cave off the center field wall to score both Devers and Nunez and make it a 4-3 game.

Had he got out of the box quicker, we could have been looking at a three-run inside the park home run, but that was not case.

With the tying run just 90 feet away now, Mookie Betts followed through with his first of two RBI doubles on the night to score Bradley from third and even things up at four runs a piece.

An inning later, JD Martinez delivered the go-ahead run the Red Sox needed by mashing his 32nd big fly of the season over everything in left field.

(still waiting for it to land.) pic.twitter.com/4zvSliMtef

412 feet, 107 feet off the bat on that home run that ended up sailing over Lansdowne and landed on the roof of the parking garage across the street from Fenway.

That long ball put the Red Sox up 5-4 going into the fifth, and they would not have to look back in what ended up being somewhat of a blowout.

From that point in the game on, an Andrew Benintendi RBI single in the sixth increased the Red Sox lead to two runs.

Fast forward to the bottom half of the eighth, and nine batters came to the plate in what turned out to be a four run inning.

Capped off by an RBI double from Mookie Betts, a bases loaded RBI walk from Rafael Devers, and a two RBI double off the bat of Eduardo Nunez, the Red Sox found themselves up 10-4 by the time the eighth had come to a close.

In the third inning of last night’s contest, Mookie Betts swiped his 20th bag of the season, marking 100 total in his career.

From @SoxNotes: At 25 years old, Mookie Betts is the youngest player ever to reach 100+ HR and 100+ stolen bases with the Red Sox. Betts has also become the first Red Sox player ever to record 20+ HR and 20+ steals in as many as 3 seasons.

It was announced this morning that Rafael Devers is headed to the 10-day disabled list with a left hamstring strain after he came up lame rounding second base in the eighth inning last night. Tzu-Wei Lin has been recalled from Triple A Pawtucket in his place.

On a more positive note, the Red Sox will be going for the series win later on this afternoon.

Looking to impress in his debut with his new club, Nathan Eovaldi gets the start for Boston. He’ll be matched up against another righty in the Twins’ Jose Berrios, who held the Red Sox to one run on five hits in 6.1 innings pitched back on June 19th.

First pitch of the series finale is scheduled for 1:05 PM ET Sunday.