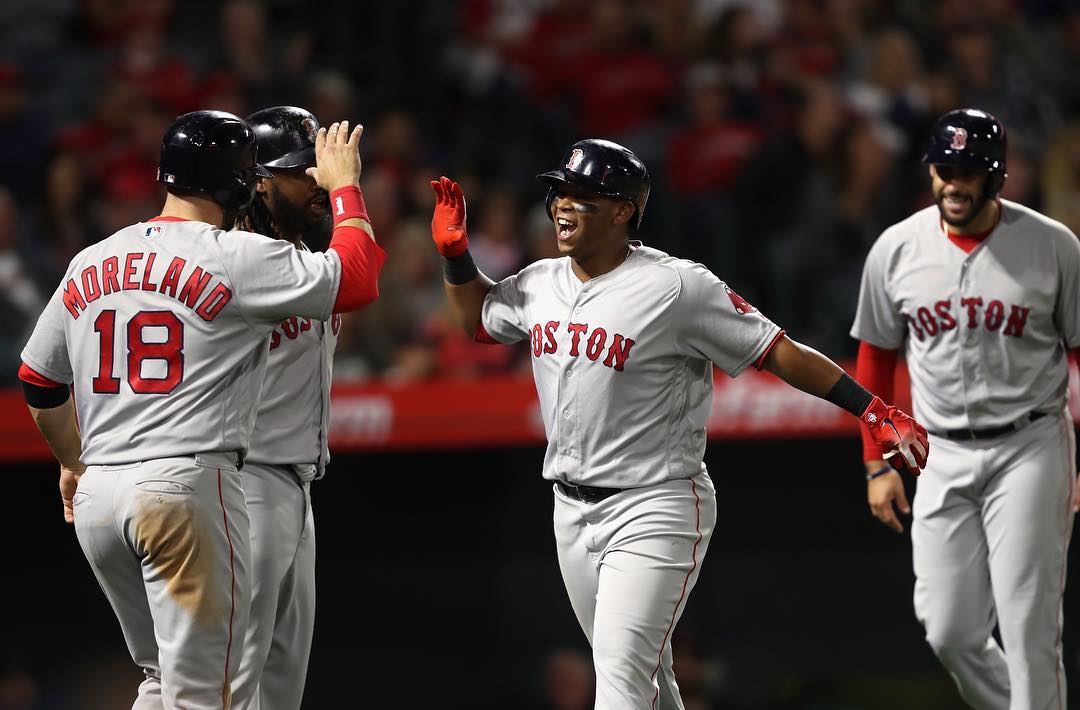 After blowing out the Angels on Tuesday, the sizzling Red Sox essentially did the same thing last night.

Rick Porcello got the start in this middle game, and he, like David Price put together a solid performance against one of the better lineups in the American League. The right hander tossed six shutout innings, scattering six hits and six strikeouts along the way to his fourth win of the season. There were several situations where it looked like the Angels could go for a few runs, but Porcello got out, unscathed, in all of them.

For instance, the Angels loaded the bases with one out in the first after the Red Sox had just picked up their first run of the game. In response to this, Porcello struck out Kole Calhoun and Zack Cozart back to back to end the inning with his team still in the lead.

Later in the third, the Angels were threatening again with runners on first and second with no outs. This time, Porcello responded by retiring the 3-4-5 hitters in order on nine pitches.

When his day ended after getting the last out of the sixth, Porcello finished with 101 pitches on the night, 71 of which went for strikes. His ERA on the year now sits at a solid 1.40.

With three more innings to work with, the Red Sox bullpen continued and finished the shutout. Carson Smith got the call for the seventh, he walked one and struck out one while tossing a scoreless frame. Marcus Walden would be responsible for the eighth, he struck out one while holding the Angels scoreless. And to wrap things up, Craig Kimbrel, who hadn’t made an appearance since April 15th, retired the side in the ninth on 10 pitches, guaranteeing the shutout and the series win.

Offensively, the Red Sox lineup followed up their six home run game on Tuesday by tacking on another nine runs last night. Once again, the lineup chased the starter for the Angels out of the game early, as Tyler Skaggs’ day was over in just the fifth inning.

Mitch Moreland got the scoring started in the first. With Hanley Ramirez on second after doubling to center, Moreland drove in him on an RBI single, his first of four on the night.

Later on in the third, the Red Sox got to Skaggs five times to up their lead to six runs. After the top third of the order began the inning by loading the bases, Moreland drove Mookie Betts in from third on a single left field. With the bases still loaded, Rafael Devers built on his solo home run from Tuesday night and mashed a bases clearing grand slam to right field. All of the sudden, the Red Sox were up big for the second straight night.

Brought the slam to the West Coast. 💪 pic.twitter.com/vVyAB3bhjy

Fast forward to the seventh, and JD Martinez went deep for his fourth long ball of the season, as he took advantage of a 2-0 count and mashed an 87 MPH slider from Angels reliever Blake Wood and sent it over the right field wall. 7-0.

With the game already in hand in the ninth and JD Martinez at first, Mitch Moreland decided he was not done yet and for the first time this season, Mitchy Four Bags went big fly to right field, giving the Red Sox their eighth and ninth runs of the contest.

Mitch Moreland belts a two-run home run to right field, extending the Red Sox's lead to 9-0 in the top of the 9th inning (00:57)

Some notes from this one:

Despite not hitting a home run or collecting an RBI, Mookie Betts still recorded two hits last night. His OPS now is currently sitting at a hefty 1.249

Since the Red Sox played their first game at Fenway Park back on April 5th, JD Martinez has put up a slash line of .364/.375/.727 to go along with four home runs and 12 RBIs in 11 games played. That translated to an OPS of 1.102. And I imagine as the weather gets nicer, Martinez will ony get better.

At the beginning of the season, I did not think Mitch Moreland had a defined role with this current team. He started the year on the bench and did not run into regular playing time for a few weeks. Since April 8th though, Moreland has an OBP of .577 and a .818 SLG in 26 plate appearances.

With the series finale later tonight, the Red Sox will be going for their seventh straight win before heading up north to Oakland for the weekend. Eduardo Rodriguez gets the start tonight against Halos righty Nick Tropeano. First pitch is once again at 10:07 PM ET.