After the Patriots lost on Thursday night, attention began to turn away from the Red Sox, who usually take a back seat to the Patriots once September begins. Well, the Red Sox played a game worth watching last night, as they won their third straight over an AL East opponent. Drew Pomeranz got the start in this one, and he looked levels better than Rays starter Chris Archer. In the six innings the lefty pitched, the Rays only managed two runs on two hits and two walks off of him, all while striking out seven times. It took more than four innings for the Rays to get a hit, but they also scored their only two runs of the game in that inning, on a two-run home run. That was all Pomeranz gave up, but he had to exit after six innings with his pitch count well over 100. I know wins are an overrated stat for pitchers, but Pomeranz picked up his 15th win last night, and I believe that is tied with Chris Sale for the most in the American League. Those two, for the most part, have had amazing seasons. With one of them, you kind of expected it, but with the other, his season performance comes as a total surprise. If you thought Pomeranz was going to be this good before the season started, you’re lying.

By the time Pomeranz left, the Red Sox had a 8-2 lead, so the bullpen was not put under any real pressure. Joe Kelly got the first call, but he could only record one out while loading the bases. Addison Reed came in trying to get out of that mess, and that’s what he did as he only allowed one of those runs to score on a force out. He came back out for the eighth as well, and was lifted in favor of Austin Maddox after recording the first out of the inning. Since being recalled on September 1st, Maddox has already appeared in four games and has yet to allow a walk or a run to score in the 5.2 innings he has pitched this month. He got the last five outs of the game, securing the team’s 80th victory of the season.

Offensively, Mookie Betts put the Red Sox on the board in the first, and they never looked back. After making a great defensive play in the top of the inning, Betts took his friend, Chris Archer deep? to right for his 19th home run of the season, his first career opposite field homer at Fenway Park. Here are both of those plays in the same video:

Archer settled down after that for a while, but the Red Sox really got to him in the fourth, scoring five times in total while Arhcer left the game. Jackie Bradley Jr., Andrew Benintendi, and Hanley Ramirez all had RBIs in the inning while Dustin Pedroia and Mitch Moreland drove in two runs without picking up an RBI. Archer was pulled in the fourth inning after failing to record one out, and it shows that pitching in Boston has not treated Archer well. The Red Sox managed to tack one more run off the Rays bullpen in the seventh on a Christian Vazquez RBI double that resulted in this: 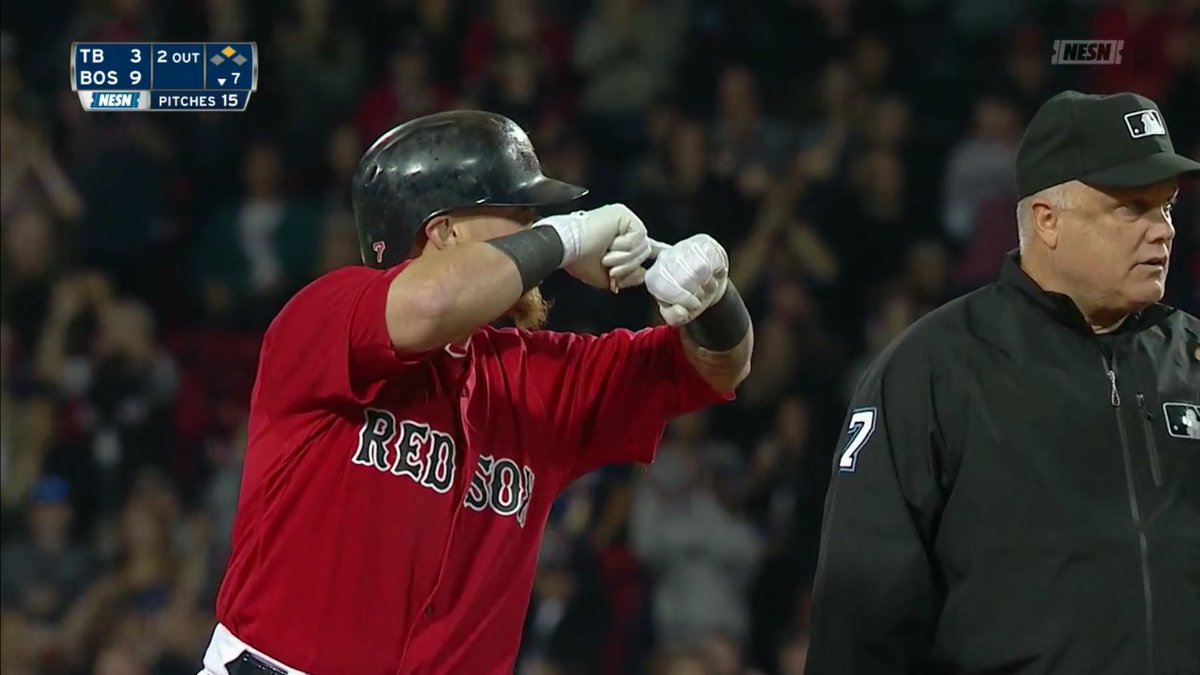 Jerry Remy and Dennis Eckersley seemed to take offense to this because of the whole Apple Gate thing, but I don’t think it’s that serious. Anyway, the Red Sox won their third straight game and the Yankees lost last night, they are now 4.5 games back.

Chris Sale gets the start tonight against Matt Andriese as the Red Sox look for their fourth straight win.