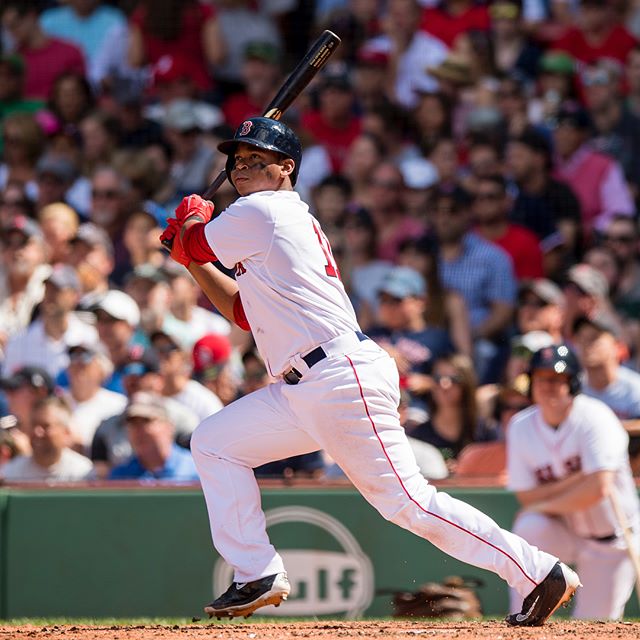 After a feel good walk-off win last night, the Red Sox got back to the way things were on Sunday, being an extremely frustrating team to watch. Drew Pomeranz was good in the 6.2 innings he pitched. At no point did Pomeranz dominate, but he was able to limit the damage. Seven hits, one earned run, one walk, and four strike outs. In relief of Pomeranz, Brandon Workman got out of the seventh inning while giving up a hit. Matt Barnes started the eighth, and the game went downhill from there. Barnes failed to record an out while allowing three hits and four runs, three of which were earned. Despite the sucky outing for Barnes, I will give him this: that inning could have gone completely different if Xander Bogaerts did not juggle that ground ball that allowed Lorenzo Cain, the first batter, to reach base. Robby Scott came in, gave up a hit, and got the first two outs of the inning, making way for Heath Hembree. Hembree finished the eighth, then went on to pitch a scoreless ninth as well. Like I said earlier today, Addison Reed could help this team. He’s not great, but he could serve as a viable eighth inning guy until Joe Kelly returns.

On the offensive side, Mitch Moreland had one of his best performances in a while. The first baseman drove in the first run of the game in the second, scoring Hanley Ramirez on an RBI single. That would be the first of Moreland’s two hits today, making it the first time since Independence Day that Moreland has recorded more than one hit in a game. The bats would go quiet until the fifth, when the rookie, Rafael Devers barely got the ball over the Green Monster for his second career home run and his first at Fenway Park. That would be it for the Red Sox in terms of runs. After the Royals took the lead in the eighth, they had the chance to win the game in the ninth. Before Mookie Betts came up with two outs, a JBJ walk, a Christian Vazquez single, and a Devers walk loaded the bases. You’d figure Mookie could at least make things interesting with a hard hit ball, but he popped up to Lorenzo Cain instead, ending the game.

Seeing a good amount of guys from the 2007 World Series team was cool, and David Ortiz was great the inning he was in the NESN booth. It’s too bad the Red Sox couldn’t have won on what was a pretty good day.

Also, shout out to Adrian Beltre for 3,000 hits. Miss that guy in a Red Sox uni.