The Red Sox took the field a little later than expected on Saturday because of a little rain delay. First pitch was officially at 7:33, instead of the original 7:10 time. Steven Wright started in this one and, unfortunately for the Red Sox, he put up another clunker of a performance. Giving up four earned runs and nine hits in only 3.2 innings of work is the definition of a disappointing performance. I don’t know if it was because of the rain or not, but it seems that Wright can struggle at times with his knuckleball. It wasn’t until the bottom of the fourth when Wright surrendered all four runs. Giving up back to back home runs to Trey Mancini and Jonathan Schoop, then giving up a single to Adam Jones which scored Caleb Joseph. Wright’s night would end sooner than expected, and, once again, a lot of credit has to go to the Red Sox bullpen. Heath Hembree was put in to the game in the fourth and held the Orioles scoreless in 3.1 inning pitched, while striking out five. Robbie Ross Jr. would come in for the eighth and got outs in 1-2-3 fashion. Steven Wright’s inconsistency puts the Red Sox in a unique situation. Wright is out of minor league options, so the only way to send him to Pawtucket would be for him to clear waivers, which is highly unlikely. It’s hard to rely on a starting pitcher when he can only pitch well in certain conditions. If it’s wet, or dry, or humid, you’re getting a different Steven Wright. So, I’m curious to see how that situation plays out.

The only runs the Red Sox scored came on a two run home run from Jackie Bradley Jr. in the top of the third. As it says in the title, JBJ hit an absolute rocket to right field. The ball ended up landing on Eutaw Street, which means that JBJ will get his own plaque, since that’s how the Orioles commemorate those long home runs. This marks the 89th time in Orioles Park history where a ball has landed on Eutaw Street. Jackie’s plaque will look something like this, with the correct information, of course: 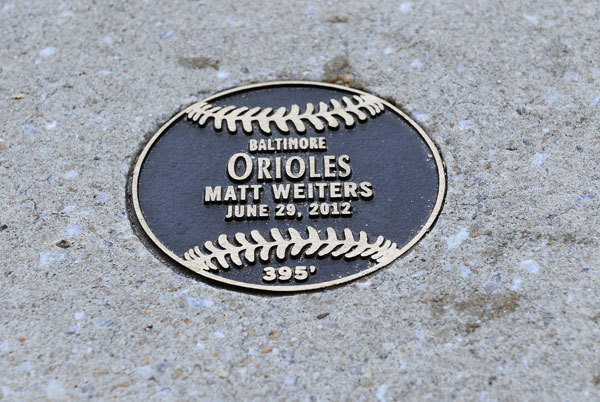 As I said, those two runs were the only runs the Red Sox got across all game. With Dustin Pedroia out of the lineup with that calf issue, Xander Bogaerts led off while Marco Hernandez patrolled second base. Six hits in nine innings is a shame, really. It appears that the Sandy Leon craze is starting to falter, as a 0-4 performance puts his batting average just above the Mendoza line at .205. There’s a good chance that Leon’s struggles could lead to Christian Vasquez seeing more playing time and getting more at bats. The biggest disappointment right now is Hanley Ramirez. Hanley has yet to hit a home run this season, and his batting average is only .211. After the season he had in 2016, you’d expect more out of Hanley, I might even drop him from my fantasy team. With Kevin Gausman coming off his worst start of the season, hopefully, the Red Sox can continue that trend Sunday afternoon.