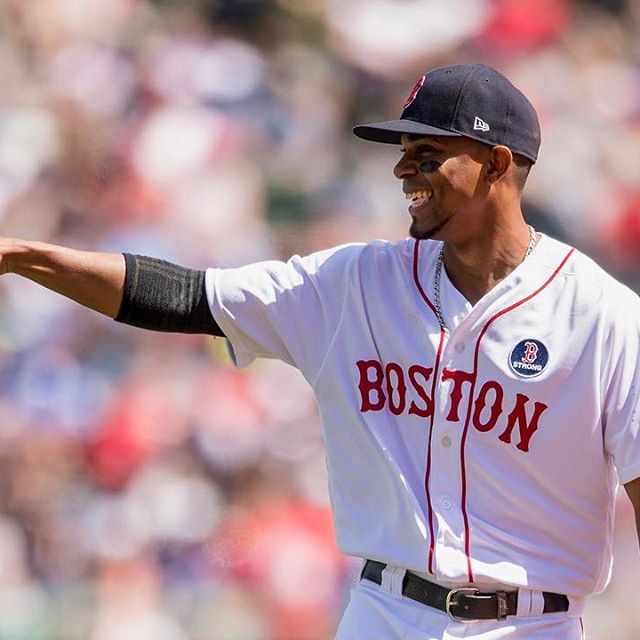 On Monday, the Red Sox took the field at a very unique time, 11 A.M in the morning. For the past 58 years, the Red Sox have had a home game on Patriots Day. It’s a very special day in Boston because of one of its biggest sporting events, The Boston Marathon. Marathon Monday and Red Sox baseball in the morning go together amazingly here in New England. I’d say its one of the best traditions in all of the United States.

The reeling knuckleballer Steven Wright got the start for today’s game, and he got off to  quite simply a terrible start. Three straight hits to start the game led to the Tampa Bay Rays scoring twice in the first, with runs being drove in by Brad Miller and Steven Souza Jr. Wright would settle in after the first however, as he pitched five scoreless innings and got taken out of the game after giving up a leadoff single in the top of the seventh. The final line for Wright looks like this: 6+ IP, 9 hits, 3 runs (1 earned), one walk, and four strikeouts. Overall, not a terrible performance from Wright, it was more of a bounce back from his previous two starts. The outing could have gone much worse and Wright will look to build on this performance when he takes the mound against the Orioles.

The Red Sox offense scored all their runs in the first and second innings. Hanley Ramirez drove in the first run, scoring Dustin Pedroia on his single. In the second inning, Andrew Benintendi drove in Marco Hernandez on an RBI single and Mookie Betts drove in Dustin Pedroia with another RBI single. Rays starter Blake Snell deserves some credit for settling down after the second, and so does the Rays bullpen for throwing another three shutout innings. Back to the offense, Andre Benintendi and Mookie Betts both had another multi-hit game, with Benintendi collecting three and Betts collecting two. 9 RBIs in 13 games is nothing to scoff at when it comes to Benintendi, especially with the absence of home runs (his only home run came on Opening Day). Mookie Betts is Mookie Betts. I expect the power to come as the season progresses, but it’s a good start for Mookie with a BA of .325 and an OPS of .800.

Last thing about the game I want to mention is Craig Kimbrel’s save streak. I really think expectations are set too high for Kimbrel because of guys like Andrew Miller and Kenley Jansen. Kimbrel isn’t a “super-reliever” like those guys, he’s a flamethrower, plain and simple. Sometimes I think Kimbrel doesn’t even know where some of his fastballs are going, he just whips them. Sure it can be nerve-wracking when he’s out on the mound.but converting 25 straight save opportunities going back to last season.

Also, I was at this game, my first Red Sox game on Patriots Day. Let me tell you, morning baseball is awesome. The fact that you could buy a hot dog and a beer at 9 A.M embodies the American spirit. Being able to watch some of the Marathon runners go through Kenmore Square after the game was pretty cool as well.